Can achievments take away the fun in gaming?

I’ve read Trophies and Achievements can take away the gamers ability to enjoy playing games. I just can say it doesn’t. At least for me. Just finished my sixth game by unlocking all Achievements. And guess what? I had lots of fun! Many people I know play games every day but don’t stick with one game for more than one week or less. I can’t understand that? As I was young, I played games for weeks, sometimes months to squeeze out the very last bit of them. And you must imagine that gamers didn’t had the chance to share their accomplishments back then.

Let’s take the latest example: Metal Gear Solid Peace Walker. The main storyline got a total playtime of what? Around 10-12 hours depending on how much time you spend into researching new weapons and recruiting troops. Now image I had finished the main story and what would have happened then? I would have stopped playing the game if I was a ordinary gamer. But no, I didn’t. I played it more, took on the extra missions and finished these. Sure I had a downtime after lets say 100 hours into the game and was close to stop working forwards my goal, but then I did it through. Played even harder and finally unlocked every achievement (in that case trophy) the game had to offer. I not only exceeded my skills, I even got gifted by a very good feeling. Some can now say “Isn’t it more important to succeed in real life than in a game?” and I would answer: If you’re gamer with hearth and soul, dedicated to your hobby, then you would know how far you can go without losing the touch to reality. 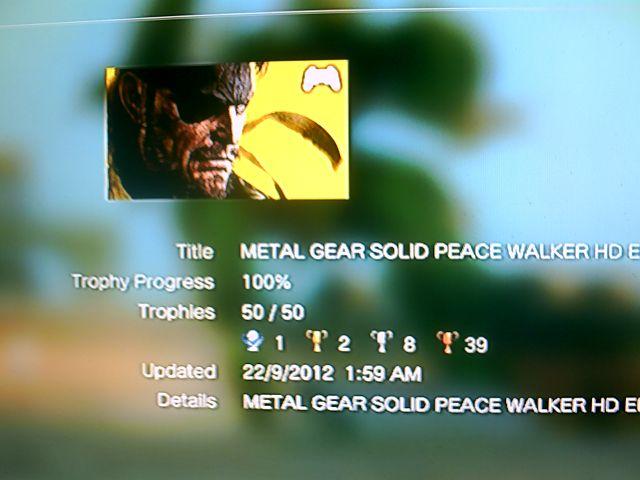 My name is Joey and I'm an active Lets Player on Youtube for more than 8 years now. I'm playing and writing about games of my childhood & sometimes even step into the world of modern gaming.
View all posts by acantophis3rd →
This entry was posted in Legacy Posts and tagged achievments, dedicated gaming, metal gear solid peace walker, nextgen gaming, platinum trophy. Bookmark the permalink.