The Supermarket can be a good place to find video games every month. I’m always broke, but not lately as I now got a job again with extra money to spend. And what am I gonna do when I got some more money to spend? Right, I go to the Supermarket and see what they have to offer. Normally the offer on games is pretty low there. Actually I indented to get the Metal Gear Solid HD Collection because I found the Tomb Raider Trilogy HD Collection in the S-mart lately. Too bad, today the MGS HD Collection wasn’t there, but it will soon I assume. Anyways, a gamefreak how I am needs to buy games from time to time to increase his level of satisfaction.

11/11/11 , Dragonborn, The Elder Scrolls 5 got released. I’m broke. What to do? Playing TES3:Morrowind of course! I just own the ordinary TES4:Oblivion Release and I thought, why not getting my hands on the TES4:GOTY now after I dug the TES3:GOTY out of my shelf?

11/15/11, at the Supermarket to get the TES4:GOTY. Pure luck, they got one box left and it only costs 10 EUR at the Software Pyramid. Let’s grab it. The Software Pyramid is a great invention, as it features top games for a low price. I like the small BigBox that includes the TES4 DVD. It somehow reminds me on the BigBoxe’s from the 90s. Almost every new PC game got released in such a box if you remember. Too bad that these boxes don’t include a well smelly manual or additional stuff like maps or reference cards anymore. But it still looks amazing. The TES4 box imitates a leather book and of course the DLC Shivering Islands, Knights of the Nine together with the armored horse Xbox360 payed one dollar for as digital download. HA! Honestly, am no collector, but I somehow understand the thrill that collectors feel when they grab a ancient bigbox at flea markets. Feels like a nerdgasm.

As I surrounded the Pyramid, another game jumped into my eyes. A only yet in germany released (a US release was planned but I don’t know if it got done already) new video game for the Das Schwarze Auge cardgame, lovely named Drakensang. Not just the main game, it’s the Gold Edition that too includes the only available AddOn (you read right, a add-on! No DLC bullshit), special items and most remarkable: a printed and well smelly manual! Another 10 EUR in the bag. It’s a nice addition to my original first released Drakensang that my wife purchased as it came out. She still got a sweet leather map but lacks the AddOn and bonus content I got now.

Last but not least, I picked the for one year not at the Supermarket available Resident Evil 5 Gold Edition for PS3 for around 20 EUR. I dunno, as I’ve heard it will be released almost a year ago, I wished to pick it right at release. But I was broke like always and so I didn’t purchased it earlier. PlayStation Move support? Allright, I don’t care for move controls as a couch potato and and I’ll scrap that from the list of preferences here. What counts to me are the two DLCs and the Versus Mode for online play. Okay, I purchased a UK release as the original Resident Evil 5 came out and now I own a EU release. I’m not sure if my old savegames work there and if not, then I’m looking forward to play through it again. Even if I have to unlock all trophies again, it does indeed allow me to unlock the to me locked Online Trophies for Versus Mode and the trophies requiring the DLCs.

That’s it for today and for my first Game Purchases post. I’ll hope you find yourself as parts in my description and leave me a comment or two. Until next time. 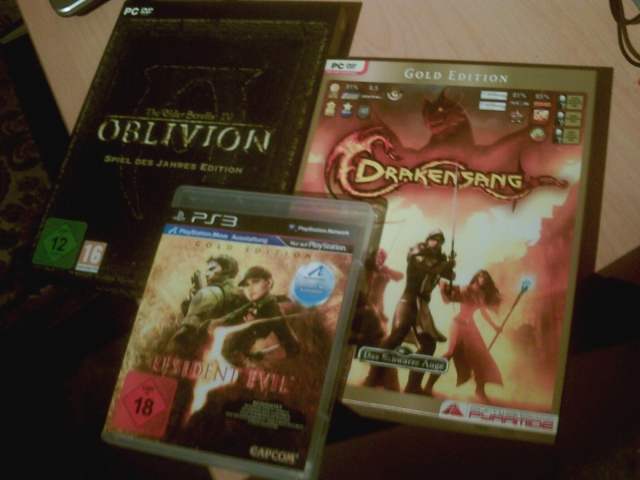 My name is Joey and I'm an active Lets Player on Youtube for more than 8 years now. I'm playing and writing about games of my childhood & sometimes even step into the world of modern gaming.
View all posts by acantophis3rd →
Image | This entry was posted in Legacy Posts and tagged Add-On, DLC, Drakensang Gold, game purchases, nerd, resident evil 5 gold edition, software pyramid, supermarket, the elder scrolls 4 oblivion GOTY. Bookmark the permalink.