System Shock is a first-person-shooter action-adventure RPG hybrid released in 1994, developed by Looking Glass Technologies and published by Origin Systems. The game itself is superior in almost every aspect compared with ID Software’s Doom, but didn’t sold very well and wasn’t the commercial success it deserved. More about that later.

The protagonist of the game is a nameless Hacker, later lovely called „Plug n‘ Play Man“ because he can insert multiple hardware without to get an IRQ error. He got caught as he successfully hacked into the Trioptimum Security Network. The corrupted Trioptimum Executive on the Space Station Citadel, Edward Diego offered him freedom and promised the Hacker to implement a military-grade neural interface into his brain if he doe’s him a favor. The Hacker agreed and did the job. He allowed E. Diego access to the artificial intelligence called S.H.O.D.A.N. and removed it’s ethical restrictions. After this actions, the hacker received his reward and got plugged into a six month long healing coma. E. Diego also deleted all files concerning these events. What was he up to?
Six months later. Something went terrible wrong. The once for security purposes used artificial intelligence took control over the station, killed all inhabitants, transformed them into something inhuman and now seeks out to extinguish the earth with it’s cyborg army and the station as it’s fortress. The Hacker, waken from his sleep seems now to be the only one that can stop S.H.O.D.A.N. and it’s plans.

System Shock features game mechanic’s which were missing in ID Software’s Doom. Instead of choosing easy, normal or hard difficulty, the player can define the four difficulty aspects combat, puzzle, mission and cyberspace individual. If he is more the adventure player then he sets the combat to 0, which deactivates combat and the mission to 2, which features all plot elements. Mission on 3 also implements a time limit of about 7 hours to complete the game. Audio-Logs, e-mail’s and hand written notes by survivors will help him to gain more informations about what’s happening and how to solve his objectives. If he is more the first-person type of player, then he sets the combat to 3 and mission to 0 and is now facing very strong, dangerous and intelligent enemies, but doesn’t need to pick up access cards or facing plot elements.

The 3d-engine was build from scratch again and is based on Origin Systems Ultima 3D-Engine. It allows the player to lean, crouch, crawl, jump, climb and even sidestep. Even more, the game supports a mouse pointer that allows the player to pick up items and to interact with the user interface and the environment. To interact with the very complex user interface is one of the key elements to master the game and essential to deal with the dangers on board the Space Station.
During the game, the player can find multiple plugins like a lantern, anti-damage shield, infrared sensors or jump-jet boots that require energy from the protagonists energy bar. Oh, did I mentioned that you can even throw different types of grenades? Throw! Imagine throwing items and grenades around in Doom! Furthermore, temporary effects like, strength- sight- or fatigue-boosts can be obtained by using one of the various stim-patches. But these patches got terrible side-effects which can be reduced by using detox-patches afterwards. If the player takes one sight-patch for example to increase his sight, then he will have an even darker sight after the patches effect is gone. 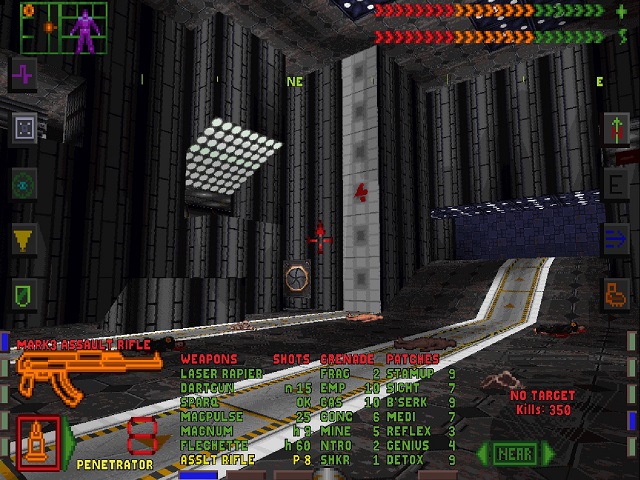 The player has also access to 16 weapons, but he can’t take them all because of the by 8 restricted weapon slots. Meelee weapons are a crowbar and later a cool laser rapier like in Star Wars. Long before Quake, Sshock got a Nailgun. It’s a Dart-Pistol, the weakest in the game. Later there are two more Pistols, one of them is a Magnum. Assault Rifle, Submachine gun and Machine gun are also available.
Each weapon owns different ammo-types. These are darts or tranquillizer darts, normal or hollow rounds, slugs or plasma packs. It’s essential to know which ammo-type deals the most damage to specific opponents. Laser weapons for example are good against humanoid enemies, but better against mechanical opponents. Yes, there are laser guns that consume energy from the players energy bar as well. Energy weapons can overhead if the charges are set too high and if shoot too rapidly.

One of the negative points is that the control scheme is very difficult to master. Many key’s are needed to control the character instead of simply moving around and shoot like in Doom without keys for leaning, crouching and crawling or climbing. The character can also be moved with the mouse, but in the same time the pointer is needed to aim, reload, or to interact with the interface which makes controlling much difficult.

In ID software’s Doom, the player had to find a blue, a red or a yellow card before he could push the button to end the level. The 10 levels of system shock are connected to each other. Just some examples:
The Hacker needs to destroy computer notes and to lower the security level before he can find a way to the elevator that leads to level 2. He can reach the computer notes by either fighting his way through the by cyborgs and mutants controlled crew quarters or he solves a complex grid or wire puzzle somewhere else that will open a door leading directly to the computer notes without to have a fight.
The Hacker needs to destroy a mining laser that soon will destroy earth. He needs to get an isotope from level 2, which is needed to activate the stations own shields on the reactor level. He also needs to hack into cyberspace and to find a key-code that can be used to deactivate the lasers security lock. Once he got everything done, he needs to return to level 2 and to fire the laser into the shields to prevent earth’s destruction.
The Hacker needs to take some plastic explosives from level 4 or he can’t destroy the antennas on level 7, but the room holding the explosives is locked and first needs to be unlocked.

System Shock was first shipped on 9 floppy disks in March, 94 and later in November re-released as a enhanced CD-ROM version with additional spoken dialog in audio-logs and e-mails, better graphics and a ressolution of 640×480. System Shock producer Warren Spector later expressed regret concerning the floppy version, stating, “I wish I could go back and make the decision not to ship the floppy version months before the full-speech CD version. The additional audio added so much it might as well have been a different game. The CD version seemed so much more, well, modern. And the perception of Shock was cemented in the press and in people’s minds by the floppy version (the silent movie version!). I really think that cost us sales…” 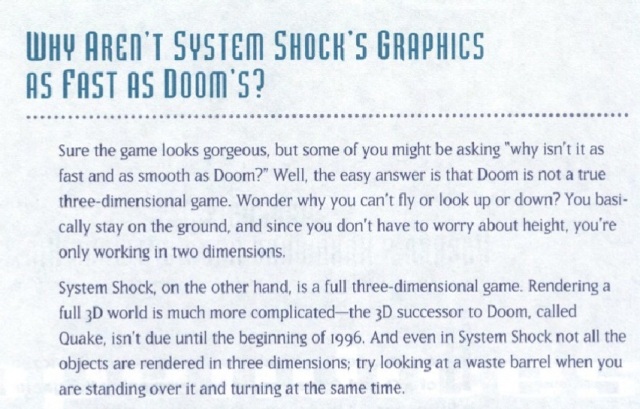 System Shock is a game far ahead of it’s time. The rich, exciting and active environment Doug Church, Warren Spector and their team created back in 1993 is a milestone for many following game directors that count on intense gaming experience and deep story telling. Ken Levine and Irrational Games continued the vision with their prequel System Shock 2 in 1999. Too bad that Bioshock from 2007 didn’t continued the given legacy from the System Shock series.

The full game is now available as System Shock Portable.

1 Response to System Shock: Superior in almost every aspect compared to iD’softs Doom